In the new piece, now playing at Laura Keene’s, called “Our Distant Relations,” perhaps the best hit made is that of the “Newsboy,” so cleverly personated by Master Fred Wren, of whom, and his sister Martha Louisa, performing in the same piece, we have given and entrusted to him, and we are glad to have the opportunity to add our testimony, and to corroborate all the good things that have been said of him.  As our young friend may, at some future day, be a shining light on the mimic boards, a brief sketch of his little career may not be uninteresting at this time.  Master Fred. Wren was born in Buffalo, N. Y., on the 14th of August, 1850.  He is one of a family of nine brothers and sisters, all players, one of whom, George Wren, Fred’s instructor, is now performing, together with two of his sisters, with the Richmond, Va., Theatre company, in Petersburg.  Master Fred made his first appearance on the stage in his native city in August, 1856, as Tony Charcoal, in the “Tinker and Tailor;” as a Bombasts, in “Bombastes and Furioso.”  Since that time he has performed in various pieces, and in a variety of characters, in all of which he has given evidence of great versatility.  He has appeared in Buffalo, Detroit, Canada, Philadelphia, Baltimore, Washington, and other places, and has now capped the climax of his previous efforts by making a really capital hit in the metropolis of America.  His mother has placed him under competent instructors, and his future career we hope will reward her for the pains she has taken.  Martha Louisa. Also at Laura Keene’s is two years younger than Fred. 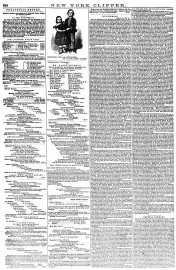